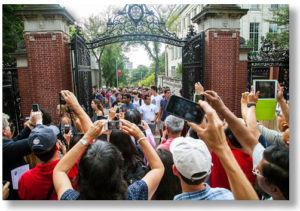 Top colleges and universities are receiving a record volume of applications on a yearly basis. With a limited number of seats in each entering class, the consequence is an appallingly low admit rate. Take Cornell University – perceived as one of the easiest Ivies to get into. Just seven years ago, its admit rate was 16.2% and now it hovers at just over 10%. In that same period, Harvard’s admit rate went from 5.9% to a record low of 4.59%. If the trend holds true, the class of 2023 and beyond may face stiffer competition among the single-digit club of elite colleges and universities.

Applying early to a binding program such as Early Decision (ED), Restrictive Early Action (REA) or a non-binding Early Action (EA), is the best way to hedge your bet and increase your chance of getting into one of these illustrious schools. The advantage is HUGE! It’s a known fact that the admit rates are more generous in early admissions than regular, with some two to three times higher than the regular decision admit rate. For Harvard, the rate was even more extreme at 14.5% in EA yet only 2.43% in regular decision. What’s important to know is early admissions program are a tool for colleges to confidently admit those who qualify academically and have a profound love for the school. In the words of Dean Fitzsimmons of Harvard, ‘early admissions is the new normal’ in which Harvard over the past several years has offered admission to 950-960 students, well over 60% of their expected enrollment of 1500 first-year students. Harvard is not alone in leveraging its early admissions program. Princeton is expecting to enroll close to 1300 students for the class of 2022, with 800 admitted from their REA.

Clearly, an admit rate in regular decision of 3-5% is something you should avoid if at all possible. Applying early can increase your odds of acceptance very significantly. Remember, students with 4.0 GPAs and perfect SATs are in plentiful supply at these schools. Differentiating yourself through quality involvement in and outside of school, articulating your passion for learning and succeeding via the supplemental essays, and committing to your college choice in the early admissions process are key to defying the ridiculous odds of getting into an Ivy-Plus institution.

This guest post was written by Solomon Admissions Consulting, an international college admissions consulting company based in New York, which helps applicants apply to and be accepted by colleges, MBA and MD programs, and private schools.